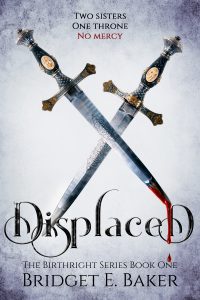 My mom should have killed me the day I was born. In her nearly nine-hundred-year reign as the Empress of the First Family, sparing my life seventeen years ago was her single act of mercy.

Evians around the world refer to me as “Enora’s Folly.”

It’s no wonder I’m fatally flawed, a blemish among the shining population of evians Mom rules. I spent my childhood running away from my twin sister’s taunts. Maybe that’s why no one on the island can catch me. On days when life feels too heavy and my heart struggles to beat without melancholy, the Kona wind blowing against my face reminds me the world is vast and full of possibility. And on days when I need that wind, but my mom’s too busy to run with me, there’s always Lark.

“Wait up,” she calls from dozens of yards behind me.

I stop at the top of the northeastern cliffs, the highest point on Ni’ihau, and scan the horizon while I wait for her. Dolphins leap energetically in the distance. I’ve been on this island the majority of my life, yet every single time I stop to take in the lush island of Kauai in the distance, and every time I stand at the highest point of Ni’ihau, the majesty of my surroundings astonishes me. When Lark finally reaches my side, her lungs heave in great, gulping breaths and she bends over double. “We should’ve taken the horses.”

“Are you okay?” I lift one eyebrow.

She waves her hand at me absently and wheezes. “Fine, you idiot. Not all of us are machines. You’ve got to ease up for the little people.”

“You’re the one who suggested we take this trail.”

“I guess that makes me the idiot.” She straightens next to me, her heart rate decelerating back to normal.

“As your best friend, I officially disagree with you.” I grin. “You’re smart and talented, Lark. People like you. Now repeat that until you believe it.”

“Speaking of how much you love me…” Lark won’t meet my eye.

Most evians don’t do favors, not without negotiation and quid pro quo, or at least a few moments of analysis to weigh the impact and risk to them. But I’m the broken heir, the defective twin, the one who doesn’t view friendship as a commodity like I should.

Which is why I immediately say, “Anything. You already know that.”

Lark’s voice drops to a whisper. “The intelligence subsection is getting more competitive every year.”

She’s a year older than me and recently completed her training, which means placement for her first work assignment happens in the next few days.

“A few years ago, Mom could’ve gotten me a spot for sure.”

“Well.” She clears her throat. “She can’t do much now. But if I could defeat a seventh gen in a challenge. . .”

Lark wants to fight me. And more than that, she needs to defeat me. Publicly.

“You want to stab me with a sword in front of everyone we know?” That’s a pretty big ask. I mean, I heal lightning quick, but it still hurts. Plus, Lark is tenth gen. Losing to her would be a new low, even for me.

“I really don’t want to get stuck working for Uncle Max.”

“Oh come on. He loves fostering the young minds. He’s always talking about it.”

“He is.” Lark groans. “The idea of restructuring corporations all day long. . .” She closes her eyes. “I’ll die of boredom.”

Lark has always been melodramatic. “Just submit your DNA and you’ll be auto-admitted into intelligence. It’s not that competitive. I mean, you suck at appearance modification, and your mom is pretty well known, so you’ll probably be stuck human side initially, but you can buckle down and practice your modifications and you’ll cross over eventually.”

“But if I defeat you, I’d be automatically ranked number one in Alamecha’s class.”

And I’d look pathetic, being beaten by someone with three generations more genetic deletions. I open my mouth to tell her no, but her quick inhalation stops me. She can test right into a top tier Security placement with a simple blood draw. Usually only candidates below fifteenth gen resort to theatrics like a public challenge. Why would she ask me to destroy my reputation for something she doesn’t even need?

“You’re absolutely positive you want a Security placement?” I ask.

Her gray eyes widen and her breath hitches again. This request matters to her. She might have even orchestrated this run to ask me without interruption. Heaven knows she never wants to go for a run, so this suggestion was out of the blue. My oldest friend has never asked me for a single thing, not in seventeen years. She probably knows better than anyone else how hard things are for me, and now she’s asking me to do something she doesn’t really need, knowing Judica will never let me forget my defeat.

I want to shove the thoughts away and ignore the nigglings at the back of my mind. But I can’t. I’m not wired that way, and I keep circling back to the same conclusion. “I can only think of one reason you’d ask me to throw a challenge.”

Lark’s heart rate spikes and the scent of her perspiration rises, almost as strongly as when she was running full tilt.

Unfortunately, that’s the confirmation I need. “You can’t do the blood test.”

Her nostrils flare. “Of course I can.”

She’s lying to me, but I hope I’m wrong about why. Because I think she just asked me to commit treason, and she didn’t even plan to tell me I was doing it.

Why does she need me to throw a fight? I rarely train, whereas she spends hours every morning with her mom. Actually, she’s rumored to be one of the best fighters on the compound. “Why not simply challenge me?”

“Come on Lark, you can tell me. What’s going on?” Please, please come clean.

“Never mind. It’s fine.” Lark turns away from me and picks at non-existent lint on her pants.

When I grab her hand, she jumps like I electrocuted her. “Tell me.”

She yanks her hand away with wounded eyes. “There’s nothing to tell.”

“You’re half human.” My words hang in the air like a cloud of gnats, impeding my vision of the future, clouding my memory of the past, a plague on my heart. I wish I could wave my hand and dissipate the reality of my accusation, but I can’t. Only Lark can fix this, by denying my wild claim.

I need her to deny it.

When she doesn’t say a word, I struggle to breathe. Lark’s father must have been human. She’s only half evian. Every moment of our seventeen years as best friends shifts, recharacterized by my new knowledge. Her heaving when we run, her training alone, her reticence to travel with me. The ground beneath my feet feels unsteady, like there’s been an earthquake.

“Why didn’t you tell me?” I whisper. “Why didn’t you confess years ago?” The realization that she didn’t even tell me now slaps me hard. I had to figure this out, about my own best friend.

A tear streaks down her face and she wipes it away ruthlessly. “What will you do now you know?”

“I can’t believe you’re asking me that right now. I’d never turn you in. You think I could ever watch your execution? Lark, look at me.”

Her lower lip wobbles. “I should never have asked in the first place. Mom was right. Why did I try to outsmart you? I’m deficient.”

I can’t even imagine living with that kind of fear. Why didn’t her mother leave with her or adopt her out? The idea of life without Lark shatters my heart into pieces. All this time and she couldn’t even risk telling her best friend. That’s reason enough for me to throw one fight. No one should live like she’s had to live, and if I can create a safer space for her in our world, I’ll do it.

This time it’s my voice that wobbles. “Your mistake wasn’t in asking, it was in withholding the relevant information. Of course I’ll do whatever you need. You’ll get into Security and select intelligence and then you’ll leave.” I realize one reason I didn’t want to help her before is that her Uncle Max lives here, and I didn’t want her to leave.

But she has to leave.

It’s only a matter of time before someone else figures it out. “And no one will ever know.”

She shakes her head. “If you figured out why I asked, someone else might guess it too.”

“So we stage your challenge. Someone optimistically throws one down on me at least twice a year, you know, seeing as I’m the useless twin. I always turn them down flat, but maybe you’d make me mad enough to accept. Best friends know exactly which buttons to push, right?”

The corner of Lark’s mouth turns up slightly. “Even so, Balthasar might figure it out,” she says. “During the match I mean. It’s dangerous, too dangerous to risk, which is why mom said not to even ask you.” She drops her face into her hands. “Mom’s going to kill me when I tell her about all this.”

“Tell your mom that you have an ally now.” I smile and take her hand in mine. “I may not be the Heir, but I’m an heir, and beating me will be enough. Besides, once you’re in the field working from the human side, you’ll be away from all the evian politics. And working on the human side, no one will ever figure it out.”

Her life has been harder than I ever realized. “How slow are you, exactly?”

Lark balls her fingers into a fist and swings at me. I duck easily. Her reflexes probably put a human to shame, but they’re notably slower than mine. Ugh. How can we pull this off?

“I think the only way people won’t notice your speed is if I’m truly horrible,” I say. “Which shouldn’t be too hard. I haven’t reached the point of integrating active combat into my training yet, so I’m sure I’ll be convincingly terrible.”

“You’re saying your mom’s insistence on training you in old school melodics might save me?” Lark’s smile reaches her eyes this time, and when her stormy gray eyes sparkle, I decide we can pull this off.

We don’t have a choice.